You have been more informative than anyone that’s come into my life before regarding the Medicare supplement insurance.  Also, I have appreciated your patience and kindness in your instructions and information that you have relayed to me. 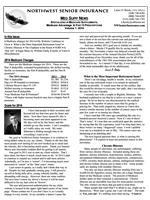 One of the major provisions of the Medicare Modernization Act passed by Congress in 2003 was to establish a Prescription Drug Plan for Medicare beneficiaries. As the fall of 2005 approached, I began to receive an increasing number of phone calls from my clients with questions about the new Part D prescription plans. I figured that the best way to get the information out to everyone was to simply send out a newsletter with a response form. I had sent some previous communications to my clients. However, in late October 2005 I mailed my first Med Supp News (click here to view) issue to my clients.

By December of 2005 it was apparent to me that there were so many additional questions rolling in, that I needed to send out another newsletter, my Winter 2005-2006 edition (click here to view). This established my precedent for sending out two newsletters per year.

Through 2010 we had another enrollment period called the Open Enrollment Period (OEP). This period ran from January 1 through March 31. During this time a person could change his/her Medicare advantage plan or switch from Medicare advantage back to original Medicare or vice-versa. A person could not switch his/her prescription plan only. So now we had a different enrollment period with a different set of confusing terminology and rules for what you could or could not do. Therefore, I continued sending out my winter edition in late December.

As time went by I saw that there were strategies for reducing prescription costs or delaying or staying out of the Part D gap altogether. I came across health related articles that looked interesting. While surfing the internet I discovered the website askapatient.com. I checked it out and saw that it was a forum for people to post their experiences with various prescription drugs. Some of my clients obliged me by telling their stories of losing weight or finding better health. Figuring that many of my clients would also want to hear these stories and to be privy to other tidbits that I came across, I began incorporating this information into my newsletters.

Beginning in 2011 Medicare discontinued the January 1 through March 31 OEP. Instead, they initiated the new Annual Disenrollment Period (ADP) from January 1 through February 14. During this 45 day window, a person can disenroll from his/her Medicare advantage plan. Since it only takes a brief paragraph to explain the ADP, there was no longer any need to launch a newsletter prior to the now-curtailed OEP. Therefore, in 2011 I began to send my second newsletter of the season in January.

Since we’re dealing with medical insurance and now prescription plans, it seems entirely appropriate to disseminate information that very well may motivate a person to make healthier choices in his/her lifestyle. For example, I have previously written about the dangers of Splenda and other artificial sweeteners. I received these two notes from a couple of readers:

I, too, am grateful for the opportunity to be a part of someone else’s journey and helping to make his or her life better.

Just as the Revolutionary War patriots weren’t afraid to voice their beliefs in what they held to be true, I have made the decision to write about potentially controversial topics in my newsletters. For example, in my 2011 January edition I wrote about the proposed “Death panels” that were part of the language in the original provisions of the 2010 Patient Protection and Affordable Care Act (PPACA), sometimes referred to as ObamaCare.

Whether it be proposed changes concerning Medicare legislation or keeping my clients informed of what changes they can make during an upcoming Annual Election Period, writing these newsletters is something I’ll continue to do.